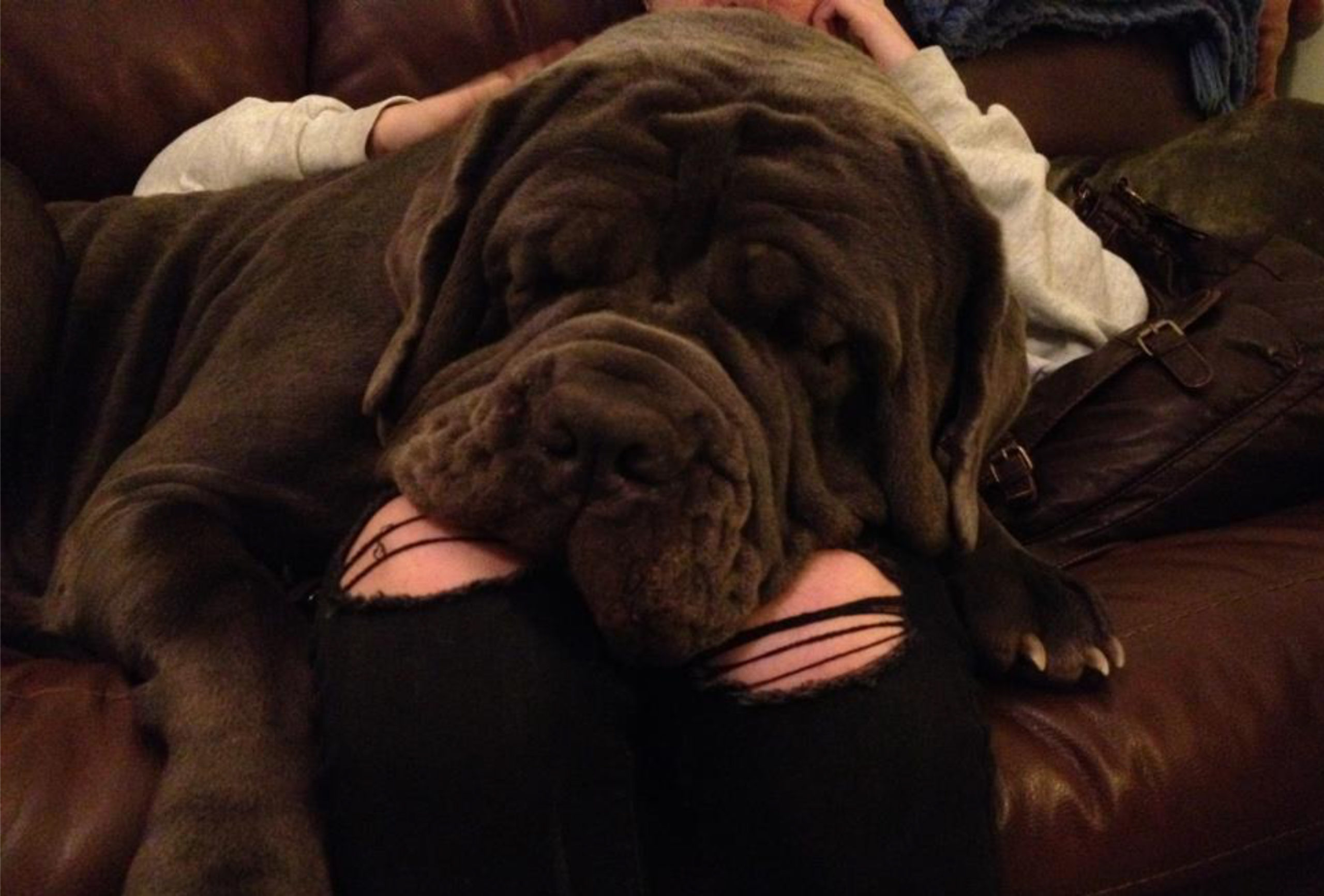 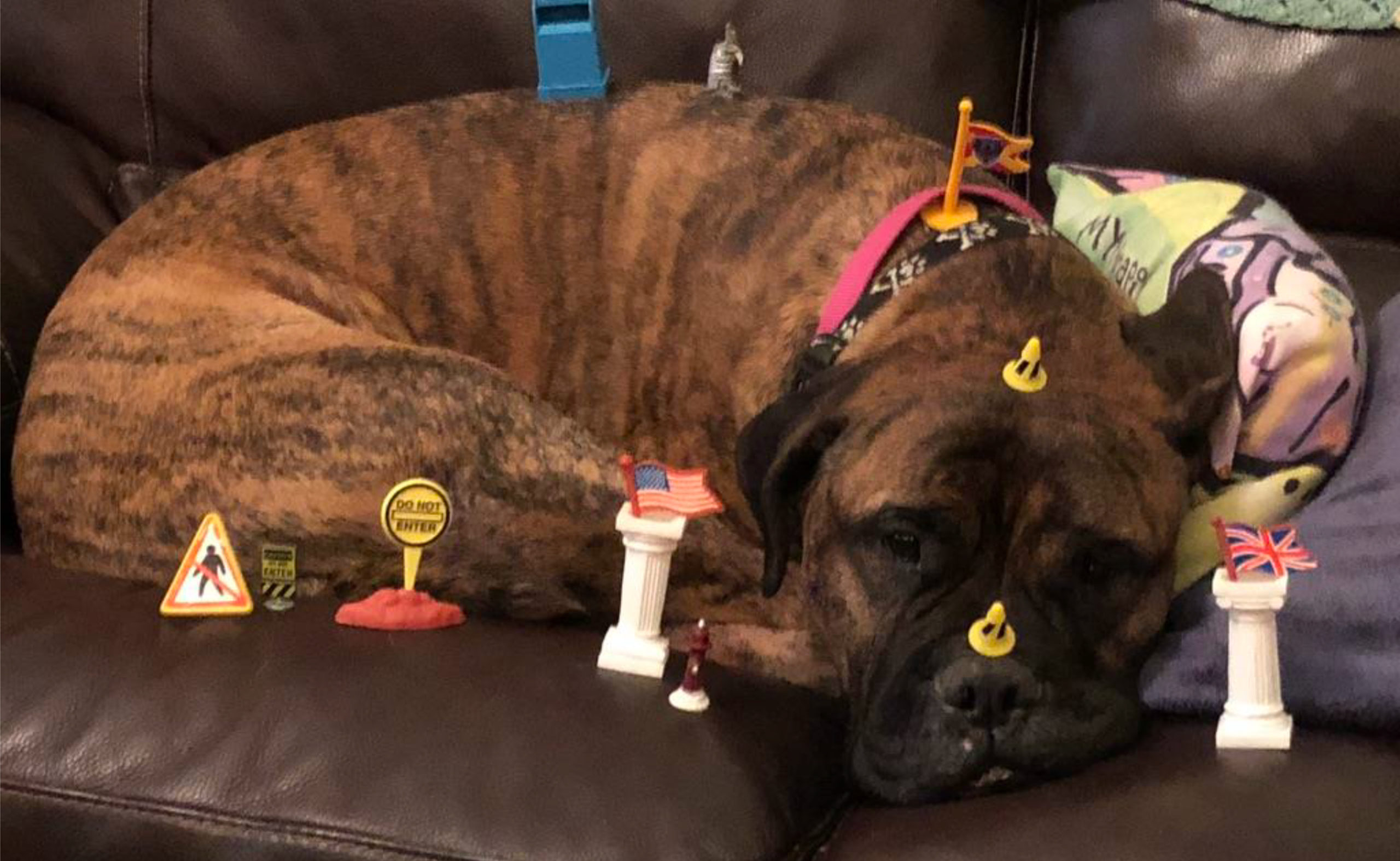 I’ve been a member of WAGS almost since it’s inception. I got my first Bullmastiff, Otis, because I was starting a pet therapy program at Peace Hospital (formerly known as Our Lady of Peace) where I worked for over 13 years. Otis was my first therapy dog that brought me to WAGS where I have served several terms as President and have been an Evaluator on the Evaluator’s Committee for many, many years, and have had several therapy dogs since then. Perhaps the reason why I am on my 5th therapy dog is because I am a sucker for the giant breeds. There’s nothing like the energy of a Bullmastiff and other mastiffs. But, we all know that the larger the dog, sadly, the shorter the life span.....

When we got Romeo, our second Neapolitan Mastiff, we knew right away that he would be a good therapy dog, because he was super laid back and loved people. Unlike most Neapolitans he didn’t mind other dogs, even of the same sex. He was raised by us and a pack consisting of two pit bulls, a pug, a bullmastiff and Parker, a Standard Poodle who was a WAGS Ambassador for many years. When he was a puppy, I was hypervigilant about bloat as it’s common in the deep chested breeds. Being a giant breed dog, we were trying to hold off neutering him until 24 months, so he didn’t have a gastropexy yet. One Sunday night, I spotted signs of bloat, however it wasn’t in Romeo, it was in Parker. Thankfully, I was able to get Parker to the emergency vet in time for them to save his life.

Romeo became a WAGS Ambassador. He did his MV at a nursing home, visiting Dottie Chapman’s mom. He was very gentle with her and the others there, recognizing that he was large and the people there needed him to be gentle and a “sweet baby bear” as Brian and I would call him. He enjoyed seeing and visiting children too. We joined Dr. Tami Harbolt in visiting at Nativity Academy. Kids would be taken aback by his size, he was a Neo after all, and weighed about 175#. He enjoyed the kids reading to him and petting his belly. Romeo had some quirks and would get “nervous” at times. When he did, he would release gas like nobody’s business! Kids would hold their noses and moan and groan, LOL! Eventually, after a couple of years, I had to retire Romie. He got quirky to the point that he would refuse to enter buildings where we were visiting. This even extended to MY office building! As a therapist, I use my therapy dogs in my work (which means we are not covered under WAGS’ insurance while we are working for wages). Frankly, if the 175# “Romie-Bear” doesn’t want to go into a building, there was no way I was going to make him. He outweighed me by a good 75#! Tami would tell me that her kids at Nativity would often ask where the farting dog was when he was no longer doing visits.

You can find clips of Romeo in the About WAGS video. Look for him with his purple collar and a little girl in a purple wheelchair. He was convinced she wanted him to play with her by running after her.

Romeo crossed the Rainbow Bridge in February, 2021 at 8.5 years old.

With Romeo retired, and Parker retired I was without a therapy dog. I continued my service to WAGS as an Evaluator. In the pack that had raised Romeo, the two pitties were eventually able to go live with their mom, which left us with aging Parker and dear Nhat Nhat, our rescue pug who was diagnosed with bone cancer in her jaw. I had hopes she would/could be a therapy dog, but while she was house trained at home, whenever I took her out, it didn’t matter where she was, if she had/wanted to go she went! (This included in the office of my practice, the public sidewalk, etc.)  We had a wonderful hospice vet, Dr. Courtney Bennett who worked with Nhat and us to keep her comfortable until the time came.

During this time, a wonderful Bullmastiff breeder, Melinda Agee of Melkev’s Bullmastiffs, who I had been in contact with years ago when I was searching for a bullmastiff and she connected me with Otis’ breeder, and ironically, she was working with ABARS (American Bullmastiff Association Rescue Service) and did our home visit when we adopted Bentley, a therapy dog prospect who unfortunately developed osteosarcoma before we could get him as a WAGS Ambassador, contacted me. She said she had a beautiful dog that had all the makings of a therapy dog.

She explained that it was devastating, she could not/would not breed her because of an ACL injury at such a young age. Apparently one of the littermates also experienced this injury which then seemed to be genetic, and as the ethical breeder I know Melinda to be, she wasn’t about to breed this dog. She wanted to know if I was interested! Hell YES! Melinda’s dogs are amazing and I was so honored that she would remember me, and know that I worked and volunteered with therapy dogs.

I explained to her that it would be a little while before we could adopt Tango because Nhat Nhat was currently dying of bone cancer, and we just couldn’t disrupt her life with a new family member. Of course, she was understanding. We went to visit/meet Tango because it had to work with Romeo. We took Romes to visit and meet Tango. She could have cared less about him! We instantly fell in love! (I’m a sucker for the brindle Bullmastiffs. Otis was one, and so was Tango).

Sadly, the day came that Nhat was ready to cross the Rainbow Bridge. Our wonderful hospice vet ventured out on a wintery day with a significant snowfall to assist. We were saddened by Nhat’s passing, but Tango gave us such a welcome distraction. She and Romeo became fast friends.

She was about 18 months old when we adopted her. She was definitely therapy dog material! I had to do some work with her, knowing what the evaluation entailed, and she had been on limited activity as she had ACL surgery and was in rehab. She quickly became a WAGS Ambassador. We did visits to St. Joseph’s Children’s Home and were one of the teams for the Commonwealth Attorney’s Office.

She visited St. Joe’s with several other great teams, one of them being Sharon Edelen and Tootsie. They were an amazing team... Sharon had taught Tootsie so many wonderful tricks, from saying her prayers, to talking on the phone, putting herself to sleep, etc., they were such an inspiring team! Tango didn’t do any of that. She was just a BIG dog, that loved to get pets, and brushed from the kids there.

I think one of my favorite experiences with Tango was her work with the Commonwealth Attorney’s Office. We were called to work with a little 4 yo kiddo who was having to testify because he was a witness in seeing his uncle and mother get shot. His mother survived. His Uncle did not.

We met with this kiddo a couple of times before the trial. When we first me at the Commonwealth Attorney’s Advocate office this little 4 yo was eating a McDonald’s Happy Meal. Tango was soooo hoping he would share some fries with her. (She LOVED food)! She waited patiently as he finished his meal and the attorney/advocates were asking him questions. He took to Tango, and she him, quickly. Once this preliminary meeting was finished, we all made plans to meet again on another day to tour the court room. Currently, the Commonwealth of KY does not allow therapy animals in the court room as some states do, during a trial, but when the courtroom is not in use, kids and the therapy animals can go in and get acquainted with the surroundings.

We came back on the designated date/time so that this kiddo could see the courtroom, sit in the witness chair, see where the judge would be, as well as the perpetrator, and where Tango would be when he was testifying. He met the Bailiff, sat in the witness chair, tried the microphone, had Tango by his side, and seemed confident.

The advocate and I explained that when we all came back for the trial that Tango would not be allowed to be in the witness stand with him. Tango gave him one of her trading cards, we talked about what her nicknames were, what she liked to eat, play with, etc., and said that he could carry her card with him on the day of the trail.

Trial day came. His mom was super nervous, not just because she was going to have to testify but because her little 4 yo son was going to have to testify, with the perp there in the courtroom. We got there early and hung out in the witness waiting area before moving to the vestibule of the court room. I explained to this kiddo that while Tango was not allowed to go in with him, she would watch from the little crack between the doors, the entire time he was in there. We gave him another of Tango’s cards, because he had forgotten his at home.

After some time, he was called in to testify. He walked directly to the witness chair and turned in the chair to face the judge directly, putting his left hand up to shield his face from his peripheral view of the perpetrator. After being asked his name and the preliminary questions about who he was, he asked the judge if she knew Tango. She shook her head no. He proceeded to pull out Tango’s card and tell her all about Tango; what her nicknames were, what she liked to eat, play with, etc., (too precious)!

The judge was able to ask him the necessary questions and he answered. He came running back to the vestibule area where his mom, other family members, Tango and I were waiting. His mom was going in next. Tango was able to stay with him for a while before the advocate said we could leave.

As a therapist, I am used to working within the confines of HIPAA and maintaining confidentiality at all costs. I was so thankful days later when the advocate called me to let me know the outcome of the trial.....thanks to the little 4 yo’s testimony, with the courage of Tango supporting him, it was instrumental in obtaining a guilty verdict!

That’s what this work is all about. Offering support and the unconditional love of a therapy dog, to give kids the courage to do such difficult things. This was just one of many rewarding experiences I had with Tango. I miss her and Romeo so much (as well as my other therapy dogs). I think Finn McCool is going to make a super therapy dog, and hopefully will do wonderful things like Romeo and Tango.